Berri is a chipmunk and Conker's girlfriend. She is one of the main characters of the Conker series, and is voiced by Louise Ridgeway.

In Twelve Tales: Conker 64 and Conker's Pocket Tales, Berri had orange-brown fur, a red dress and shoes, and long, dark brunette hair. She wore eyeliner and had green eyes. She was the same height as Conker.

Ever since the Conker series shifted to mature audiences, Berri had a complete design overhaul. Starting with Bad Fur Day, Berri had the typical sexualized look of being thin and curvaceous. Her fur color was changed to gray, and she became a lot taller—more than twice Conker's height. She also wears a pink sports bikini and matching pink shoes. In Live & Reloaded the back of her bra reads "69", an obvious reference to the sex position. Despite being a chipmunk, neither of Berri's designs depict a tail.

In Twelve Tales, the save icon depicting Berri's head resembles her Bad Fur Day design (except for the green eyes). This implies her design change was underway since Twelve Tales.

Before Bad Fur Day, Berri originally had a kind, cheery, and sweet personality like Conker. While little of her personality was shown in Conker's Pocket Tales, it is shown more in the cancelled Twelve Tales: Conker 64.

Berri completely changed since Bad Fur Day. Berri became level-headed, smart, but still snobby. Her entire personality was turned into a complete stereotype. Berri is obsessed with fitness, as she often works out daily. In spite of her intellect, she also has a dim-witted side, specifically when she did not recognize Conker in his caveman headwear. Berri is very fond of the color pink, and she has a typical valley girl accent. She also has a tendency to complain, for instance, when she deemed the pants to her Heist outfit as "too tight".

Berri is notably based on both sexualized and promiscuous females. This is exemplified by a few things. A minor instance in Bad Fur Day is when Berri's automated home phone message states that she may ring the caller back if he "leaves his number" and "has a cute voice". A more obvious instance is at the end of the Uga Buga chapter, when she became Don Weaso's aide and flirted with him.

Berri makes a few more cameos in Live & Reloaded, which reveal more of her sexualized personality. One of her cameos is on a magazine that Conker may read if idle for some time, "Fur Only", a Playboy-type magazine. Another instance is in the bathroom in the It's War chapter, a flyer advertised Berri: "Call Berri: She's waiting for your conkers...". Berri's phone number is 555-2368, and the flyer implies that she is a prostitute. This means her automated message is possibly directed to callers interested in her "services".

Despite her promiscuous nature, snobby attitude, and frustration with Conker's alcoholism, Berri still cares about Conker and nicknames him "Conker Honey".

Berri had a planned debut in Twelve Tales: Conker 64. She would have been another playable character, aside from Conker. She was playable in the strategy-based segments and even had a sidekick, the Purple Dino.

Berri celebrates Conker's birthday with him.

In her debut in Conker's Pocket Tales, she was a small light brown chipmunk with brunette hair who was about the same size as Conker. She wore a red dress, and had long brown hair. In this game she plans a surprise birthday party for Conker but is kidnapped by the Evil Acorn. Conker must save her and retrieve his presents. 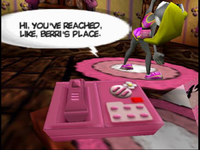 Berri exercises while her phone leaves an automated message. 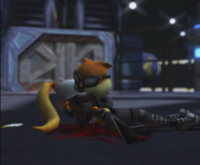 Berri dies by a gunshot from Don Weaso in Conker: Live & Reloaded

Berri reappears in Conker's Bad Fur Day. She had a complete aesthetic and personality overhaul as the game shifted the Conker franchise from family-friendly to a mature audience.

She is seen working out in her house during the opening sequence. Right as Conker starts the Uga Buga chapter, a cutscene shows Berri being kidnapped by a Stone Giant. Conker eventually discovers her imprisoned at Rock Solid and frees her. Berri does not recognize Conker from his headgear, and runs away. Berri is later seen as Don Weaso's aide at the Feral Reserve Bank.

In the final chapter, Heist, Don Weaso orders both Conker and Berri to rob the Feral Reserve Bank. The entire segment parodies The Matrix, including their outfits: Conker's is based on Neo's, while Berri's is based on Trinity's. Both of them fight a handful of Security Guards. However, aside from the cutscenes, Berri does not actually shoot at any of the Weasel Guards: she only horizontally runs back and forth between the columns.

The mission was eventually revealed to be a devised trap from the Panther King. After Conker takes thousands of Cash bundles in the vault, him and Berri are confronted by the Panther King and Don Weaso. The Panther King requests Don to shoot Berri, which he does so. Berri is killed from the gunshot. Later, when Conker pulls a nearby lever, an airlock opens and sucks Berri's corpse into space, among other objects.

The game locks near the end of the final battle against Heinrich. Conker communicates to the Programmer and uses the opportunity to defeat Heinrich. He forgets to ask the Programmer to revive Berri, and Conker is very unhappy about it, even as king. Berri's role is identical in Conker: Live & Reloaded, and she only appears in the single player adventure mode. She makes a few cameos unique to this port, specifically revealing her sexualized personality. She was also added as a bartender of The Cock and Plucker in the game's menu select, which is seen if the player goes to the Xbox Live & Co. (Multiplayer) option.

Sometime after Berri's death, Conker would reportedly have a new girlfriend in the canceled sequel Conker's Other Bad Day.[citation needed] Chris Seavor revealed that Berri would return in the game, as a Terminator sent after Conker, called the 'Berri-nator'. She was most likely the sequel's main antagonist.[citation needed]

In another tweet, Chris Seavor stated she was planned as the "Panther Queen", which was only revealed at the ending. The full details are unknown.[2]

The Twelve Tales-design Berri has a cameo appearance in Banjo-Kazooie. She is depicted on a poster hanging above a bunk bed in Rusty Bucket Bay. In the Xbox Live Arcade version, the poster was replaced with Bad Fur Day-design Conker.