The Great Mighty Poo, also known simply as Mighty Poo[1] and The Beast of Poo Mountain[2], is a giant opera-singing pile of feces who appears in Conker's Bad Fur Day and Conker: Live & Reloaded. He is the boss of the Sloprano chapter, and his lair is the interior of Poo Mountain. He is voiced by Chris Marlow, and is the only male character to not be voiced by Chris Seavor.

He is one of the best known characters from Bad Fur Day, mostly from all the unique scatological references in the boss battle. His interests include eating Sweet Corn and singing opera, and he has an easily irritable personality.

When Conker first entered Poo Mountain's interior, a Dung Beetle flies right into Conker; the Dung Beetle informed him that there was "something really bad" in the mountain. The Dung Beetle provides a flashback of when a "giant hand" had killed his friends, Tezza and Bazza, by dragging them into the poo.

The area has some Sweet Corn, and Conker hears a mysterious voice ordering anyone to provide him. Conker, not knowing the origin of the voice, ends up listening. Conker can grab a piece of Sweet Corn by knocking it down with his Frying Pan, carrying it to a platform, and throws it into the center pool. As Conker attempts to grab Sweet Corn on the circular pathway, he must avoid being swatted by a giant brown hand from the center of it. When the first Sweet Corn is thrown in, a cutscene parodying Jaws plays; the Sweet Corn floats in the pool, looks around, and then whirls down, screaming.

Conker must head up the trail and throw two more Sweet Corn in from another ledge. The giant hand follows him there and will continue attempting to swat him from the pits in the pathways. Afterward, Conker must continue going through the trail and throw three more in from the final ledge. In Live & Reloaded, Conker only has to throw in one Sweet Corn from each location.

When the final Sweet Corn is thrown in, the Great Mighty Poo dramatically emerges from the center pool, puts the last one in his mouth as a makeshift tooth, and begins to sing his own opera song, complete with orchestra-based instrumentation in the background.

After singing the first verse, the Great Mighty Poo pulls off chunks of poo from himself and tosses it at Conker. Conker must avoid it and go to a nearby Context Zone, which provides him a large roll of Toilet Paper. The Great Mighty Poo follows Conker, who must throw the Toilet Paper in his mouth when he opens it to sing his vocal chorus.

This boss fight is the only one that Conker can exit from. The boss battle resets when Conker re-enters the area. 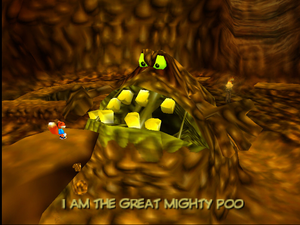 The Great Mighty Poo sings his song to Conker.

Verse 1
(*Ahem*)
(Mi mi mi mi miiiii)
I am the Great Mighty Poo
and I'm going to throw my shit at you!
A huge supply of tish
come[sic] from my chocolate starfish.
How about some scat you little twat?

Verse 2
Do you really think you'll survive in here?
You don't seem to know which creek you're in.
Sweet corn is the only thing that makes it through my rear.
How d'you think I keep this lovely grin?
*ting*
(Have some more caviar!)

Verse 3
Now I'm really getting rather mad.
You're like a niggly tickly shitty little tag nut.
When I've knocked you out with all my bab,
I'm going to take your head and ram it up my butt.

After Conker flushes the Great Mighty Poo, he says, "Ah! You cursed squirrel! Look what you've done. I'm flushing! I'm flushing! Oh, what a world, what a world. Who'd have thought a good little squirrel like you could have destroyed my beautiful clagginess. Oh! I'm going! AAHH... NO!" to what Conker laughs and remarks "Now that's what I call a bowel movement." These last few lines parody the speech from when the Wicked Witch of the West melts in The Wizard of Oz, replacing "cursed brat" with "cursed squirrel", "I'm melting" with "I'm flushing", "a good little girl" with "a good little squirrel", and "my beautiful wickedness" with "my beautiful clagginess" as context-based replacements.

The words "shit" and "twat" are censored in Live & Reloaded.