Not to be confused with Uga Buga or Buga the Knut.

The Ugas[1][2][3] are a tribe of cavemen and prominent characters in the eponymous chapter, Uga Buga, in Conker's Bad Fur Day and its Xbox remake, Conker: Live & Reloaded. Their leader is a large caveman, Buga the Knut, who also has a large girlfriend, Jugga. The Ugas only have one sub-species, the Surf Punks. Ugas are the only humanoid characters in the Conker franchise.

Ugas are short cavemen wielding a large bone or club for attacking others. They wear a red shirt with black spots and blue shoes. They have a big lower jaw, with a few teeth coming out. Ugas are bald, but some wear a wolf head for headgear. 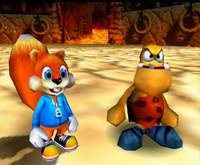 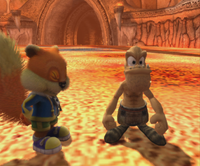 Most Ugas are among Conker's enemies. The first two Ugas he encounters patrol a side of the Uga head statue, which Conker pounded down as an Anvil earlier. They attempt to whack Conker with their clubs. He cannot defeat them with his Frying Pan (or Baseball Bat), which momentarily flips them over. Conker must pound the Uga statue again to open a door below. Conker must roll a dormant Rock'ard from outside of Rock Solid and through the door to defeat some Ugas and open a blocked entrance.

This leads to the volcanic portion, where Conker finds a few Ugas worship a large stone deity, the Dragon God. Like the chapter's first two Ugas, they also attempt to attack Conker. There are more along the path leading to a giant egg containing Fangy. After it hatches, Fangy follows Conker and eats the Ugas in its path.

Later, Conker exits back out of the Dragon God's mouth, with his new headgear. He is approached by four Ugas, whom Conker assumed would be attacked by. However, since he entered from their idol, the four Ugas worship him. Conker asks whether they like the Rock'ards located outside of Rock Solid and requests Ugas to follow him (as they chant "follow squerfudgie") to get rid of them. In a similar instance with the baby Fangy, Conker must slowly lead the four Ugas, because they easily get lost. When he returns to Rock Solid, Conker must attack every Rock'ard with a Frying Pan (or Baseball Bat) as a cue for the four Ugas to attack and break them apart.

Later, Don Weaso assigns Conker a task to kill the whole Uga race with a Bomb. This is because Weaso deems them out of place for the ecosystem. Conker later drops the Bomb off the ledge, where he also found a dead Uga and its headgear. Even after he kills some Ugas, Conker still encounters more: he gets in a Hoverboard race with three Surf Punks, who stole his Cash.

Conker ends up in the Arena directly after the race. He finds himself in the middle of an event, likely organized by Buga the Knut. Out of entertainment, Buga has Conker battle some Ugas while a large raptor, Fangy, attempts to eat him and the Ugas (similar to the baby dinosaur, Fangy). Conker must tame Fangy, then control him to either eat every Uga or ram them in the lava. They must fight three Uga waves in total, each with a higher difficulty. In the second wave, Buga sends out Ugas wielding a sword and shield, and lastly the third wave, who throw arrows at the duo. Buga is shocked that Conker and Fangy managed to defeat each swarm and decides to fights them himself. The normal Ugas are not shown again (excluding the spectators in the Arena).

Ugas are playable characters in the Raptor mini-game of Bad Fur Day's Multi mode. Additionally, from the main menu, the player can access the Cheats menu and enter "EATBOX" to unlock Ugas for the Deathmatch mode.