This article is about the item in various Conker games. For the main character of the series, see Conker the Squirrel. 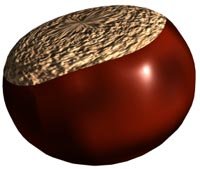 Conkers are nuts that sprout from a Aesculus hippocastanum tree. In the Conker series, they are used as Slingshot ammo.

Conkers first appear in Conker's Pocket Tales, and they are considerably the counterpart to Acorns as both are scattered in various parts of the overworld, including the interiors. Conker cannot fire any Conkers unless he obtains a Slingshot in the Windmill of Willow Woods. The first Conker nut is inside of Conker's House, to the right of his green couch. There is conker icon that shows how many of them Conker has collected. Whenever he collects a conker, the icon briefly displays at the top-right corner. Whenever the game is reset, Conker loses every conker that he collected.

In the Game Boy version, the number of conkers is always shown on the HUD at the bottom part of the screen. Conker starts his journey with ten conkers. Neither a conker nor an acorn can be found in Conker's House in this version. Whenever Conker uses a Save Point or exits a room, conkers are added back on the overworld, and Conker can take advantage of this to easily obtain more conkers.

Conkers were planned to appear in the cancelled Twelve Tales: Conker 64. Conker could even shake them out of trees. The number of Conkers were consistently displayed on-screen in the 1997 build, when the game was named Conker's Quest. In later revisions, the equals sign was dropped, the numbers received a new font and were placed at the top, and the Conker icon was resized and moved to the bottom.

Conkers reappear in Conker's Bad Fur Day but only from specific Context Zones where Conker uses the Slingshot. Contrary to Pocket Tales, Conker can fire an unlimited amount of Conkers. Conker fires flaming Conker nuts from the Context Zone in the chapter It's War, in which he must individually fire at two TNT Imps.