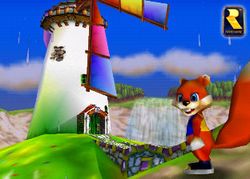 Conker stands near the Windmill.

The Windmill is a landmark area in most of the Conker titles.

The interior of the Windmill in Twelve Tales.

The Windmill would have made a debut in the cancelled Twelve Tales: Conker 64. It was a featured location in the chapter with an identical name, Windmill. The Windmill could be accessed, and had a spinning stone wheel inside, which likely inspired a larger stone wheel in the Bats Tower chapter of Bad Fur Day

The Windmill also appears in Conker's Pocket Tales, as a landmark location of Willow Woods. Conker can only access it after receiving the Key from the Forest Guardian. The Slingshot is located inside the Windmill, which Conker can get to after solving some block puzzles within its rooms and unlocking their doors.

The Windmill does not appear if played on the original Game Boy. In that version, the location is a regular mill called "Mill on the Hill".

The Windmill from Twelve Tales was recycled for the main landmark of the Windy chapter of Conker's Bad Fur Day and its Xbox remake, Conker: Live & Reloaded. Its design was changed to barren and colorless, it has an unreachable wooden plank path connecting two entrances, and has other minor aesthetic differences. Despite being a landmark, the Windmill has no significant role, and Conker cannot access it. The Windmill is located up a spiraling hill guarded by Earthworms, and Mr. Barrel sits outside its entrance.

In the first segment of the Heist chapter, "The Windmill's Dead", Conker finds out that the Windmill was destroyed. This is because Rodent flew into it after Tediz Island exploded at the end of the chapter, It's War.