The Lady Cogs[1] are a group of three female cogs. They appear in the Bats Tower chapter during the "Cog's Revenge" section in Conker's Bad Fur Day and Conker: Live & Reloaded. They each have their own body color: red, blue, and green. They have long eyelashes and lipstick, typical features of identifying female characters. 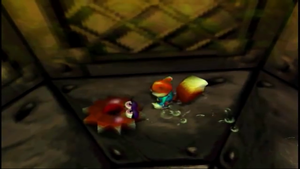 The red Lady Cog was knocked over by Conker's Frying Pan.

The Lady Cogs were first mentioned by the Schizoid Cog (as Carl) inside the Bats Tower building. He demanded for Conker to find his "missing cogs" or "fuck off". In order to find them, Conker must climb up the tower and pull a Lever to open an underwater passage.

The red Lady Cog is located in the first room following the passage, and the green and blue ones are in the following circular and symmetrical room. In Conker: Live & Reloaded, the green Lady Cog appears in the same room as the Schizoid Cog.

The Lady Cogs are afraid of Conker, and they quickly hop away when they see him. Conker can temporarily leave a Lady Cog knocked over by whacking her with the Frying Pan. He must pick her up, swim through the underwater tunnel, and place her on the post beneath Schizoid Cog. Each Lady Cog cries for help while she is held.

After Conker spins the stone wheel, the Schizoid Cog flies off his post. In an act of revenge, the Lady Cogs beat up Carl and put the Schizoid Cog on Mr. Big Cog's stump. The red Lady Cog gives Conker a slobbery kiss (otherwise the blue one does in Conker: Live & Reloaded). They decide to travel to the Caribbean and take their suitcases with them.

During the scene where Conker is inaugurated as king, the red Lady Cog is one of the characters to celebrate his new leadership. She and the other two Lady Cogs returned from vacation. The red Lady Cog stands at Conker's throne, including in the opening prologue.