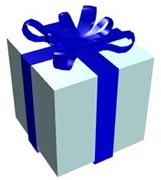 Conker jumps at a Present in Twelve Tales: Conker 64.

Presents were also planned as a key item in Twelve Tales: Conker 64. The game's backstory also involved Conker and Berri recovering 100 Presents, which were stolen and spread across the world map by Hoodlums.[1] The franchise would most likely have a recurring theme of Conker recovering Presents. In this game, the Presents have clear, sky blue wrapping and a yellow ribbon.

To obtain a Present, Conker and Berri had to complete a task of a chapter. For instance, in "Balloon Bonanza" of the Windmill chapter, Conker can only obtain the Present from collecting every Balloon in the area, which Knowit even provides instructions for.[2]

Conker stands next to a Present.

Presents appear as the primary collectible in Conker's Pocket Tales. They have blue wrapping and a yellow ribbon.

These items were given to Conker on his birthday party. However, the Evil Acorn crashed it, kidnapped Berri, and scattered his Presents all over the world map. In the Game Boy Color version, Presents have a red variant, known as Secret Presents. While their general purpose remains the same, Secret Presents are both optional and harder to collect.

48 Presents appear in the game, with eight hidden in each world. Conker can retrieve his Presents through a variety of means, including completing puzzles, using an items to reach a Present in a specific area, completing a mini-game challenge, talking to certain characters, or defeating a boss.

An official artwork shows Conker holding a Present with yellow wrapping. However, no such Present can be collected in the game.

This section is a stub. You can help Conker Wiki by expanding it.