“The all-rounder, the jack of all trades, the basic, reliable combat unit Grunts have no particular specialty or imposing physical characteristic, but they compensate for it in other ways- with guts, access to powerful firearms, and the valuable self-heal ability (which naturally makes them a lot harder to kill if given time to use it).”
—From the game manual

“Don’t underestimate the power of the everyday Joe. If you don’t have any special skills, forget about it. You were made to be a Grunt, easily the coolest of all the classes. You get to carry a big gun, and we teach you how to heal yourself for those times when you skin your knee.”
—Community Conker site 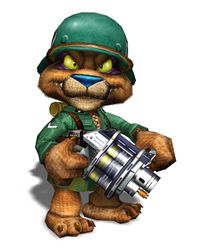 Artwork of a Tedi Grunt

The Grunt is the most basic class in the Chapter X mode, starting with the Sturm 21 capable of either shooting in automatic (Fires the gun nonstop until runs out of ammo though very inaccurate), Burst (fires in three, saves ammo and makes it accurate.) and Dum Dum (slowest but, destroys vehicle very quickly). A medgun that can heal others, frag and stun grenades, and has an ability to heal itself by using Self-heal which restores all of his health. And his Vehicle is the Toad MKII. When upgraded the gains Magnova grenades, and can now drive an R-hog but the biggest useful weapon he gets is the Hogster which is the broken weapon in multiplayer due to being able to shoot far and its high damage, like the Sturm 21 it also has three fire modes, Frag (Goes on a timer and explodes after a few seconds.), Impact (Makes the grenade explodes on impact), and Release (goes off when the player presses the fire button again.)

The SHC grunt, has gray fur, blue eyes, and a flat top hairstyle when he has no helmet. three notable things are he has a stitched-up wound on his left cheek due to fighting and his left eye is a bit pinkish and more winkled either due to the war, being buzzed, or not enough sleep, and one of the teeth is chipped either due to pre-war or during the war. The old war is the ones seen in the It's War chapter of Conker's Bad Fur Day, wearing army attire like the rest of the SHC classes, theirs a few details like his backpack has a shovel probably to either dig graves or to dig trenches, an ace of spades card attached to his m1helmet due to the fact it gives him good luck and he has the captain symbol on front suggesting he's in captain rank. In the future war, he ditches the helmet but still keeps his ace of spades since he lets his ear holds it, like the rest of the future SHC classes he wears a futuristic uniform, two interesting details can be found, first he has a star on the right chest which might suggest he might have ranked up to brigadier general during the timeline and bellow the star is a tally mark which suggests he marks it on his suit every Machine Tedi killed, he has currently either killed five (like traditional tally marks) or four since the fourth is unseen.

Tedi grunts, like their SHC Grunt counterparts, retain their appearance from the It's War chapter. Tedi grunts wear a trenchcoat, with the left shoulder indicating that they are a lance corporal (according to British ranks within World War II) and a neck collar on both sides that has the Tediz symbol. Tedi grunts also wear a backpack. He wears an Stahlhelm which has the german empire-colored shield, like the actual Stahlhelm while the other side is the Tediz symbol. In the Future War, he gained a little weight, wearing full chest body armor with the shoulder pads having a symbol of sorts, leg straps, and a samurai-esque helmet which has a visor on and a long device on the left side of the helmet. So far, the future Grunt Tedi is the only Tedi to not have any major modifications to him

An SHC Grunt has the personality of a typical American soldier. He has a deep voice, and his taunts are very aggressive, such as when he claims to be a "Four star, motherfucker!" Most of the time, and SHC Grunt pronounces the "cker" suffix as "ckus".

Like the other Tediz, a Grunt Tedi does not exhibit much of a personality. A Tedi Grunt sometimes imitates the sound of a machine gun or explosives and gets impatient if his teammates are out of ammo. The Hogster is given multiple names by the Tediz Grunts, such as "grenade launcher" and "Grenada launcher."