“I don't want to have to get the duct tape out again!”
—Panther King

In the Spooky chapter, Count Batula tells Conker about a war over 300 years back, the Milk Wars. In it, the panthers and the oldest family of squirrels, the Kulas of Conk, waged war against the weasels and the Weasel King. The panthers and their king, the Panther King, rose to power, and the king cut the legs off the Weasel King and overtook the kingdom, which he rechristened the "Panther Kingdom". The panthers betrayed the Kulas of Conk, and banished them to the darkest regions of the kingdom.

Some believe that Batula's story is false. The Weasel King is assumed to be Kriplespac, who actually lost his legs from a missile launched by an SHC member at the end of the mission, Beach Dead. This story is told in the Panther King's description for the Bad Fur Day manual, albeit somewhat more summarized. It states that the story is a myth: it's unknown whether it's true or not. 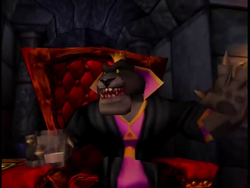 The Panther King holds a glass of Milk.

In the opening cutscene of the chapter Windy, the Panther King calls in Kriplespac to research a table leg replacement. He threatened to use the "duct tape" on Kriplespac if the table is unsuccessfully repaired. After much scientific research, Kriplespac concluded that a red squirrel would be an ideal table leg. The Weasel Guards then search after a red squirrel, specifically Conker. 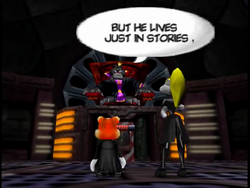 In the Heist chapter, Don Weaso orders Conker and Berri into robbing the Feral Reserve Bank. After Conker collects hundreds of Cash bundles in the bank's vault, the Panther King reveals himself, on his throne. The heist was a trap. At first Conker did not recognize the Panther King but quickly realized his identity. Conker had previously thought the Panther King was fictional, as he was featured in bedtime stories that Conker's mom read to Conker at a young age. Don Weaso from behind the Panther King's throne and reveals he was also involved in the trap. The Panther King paid Weaso a bounty of Cash and then shoots Berri to death, which the Panther King ordered him to shortly afterward.

The Panther King suddenly feels indigestion and calls in Von Kriplespac (who also appears from behind his throne) to fetch him Milk. He believes it would help with his indigestion, which gets worsens. He is then unable breathe, until a xenomorph suddenly bursts out of his heart, killing him. Kriplespac names the alien Heinrich, the actual final boss. Previously, the player would presume that the Panther King is the last boss.

After Conker pulls a lever, a window opens a portal into space. The Panther King's corpse is sucked out in space along with other objects in the room. Conker's allies inaugurate him as the Panther Kingdom's new king after he kills Heinrich.

The Panther King is frozen in carbonite.

The Panther King after being resurrected.

200 years later, in the Future War of Live & Reloaded, the Panther King was frozen in carbonite and sealed away in a tomb on the Three Towers map (possibly based on how Han Solo was trapped in carbonite in Star Wars V: The Empire Strikes Back). It is unknown how the Panther King ended up in this state.

The SHC and Tediz originally thought the Panther King's tomb was a mass-destruction weapon, of which they named "The Thing". Both battalions began another war over who would receive it. Tediz eventually discovered "The Thing" first and took it to their home world.

The final mission is set on their home world, named Doon. "The Thing" is revealed to be the Panther King in the mission's opening cinematic. The Tediz attempt to resurrect him so that he would destroy the SHC. This decision is unusual because the Tediz' leader, Von Kriplespac, hated the Panther King in Bad Fur Day, and was even the reason for his death. If Tediz win the war, they successfully revive the Panther King. Upon being brought back to life, the Panther King immediately demands the Tediz to fetch him Milk. The Tediz cheer over his resurrection, and this marks the end of the Future War.

The Panther King had gray fur, and he wore a robe colored dark gray and purple, with yellow outlines. He wore a necklace of a red triangle. He had four fingers on each hand and three toes on each foot. Each toe and finger had a large claw on it. The Panther King wore a small crown on his head.

Aside from a more realistic look, the Panther King had some minor aesthetic changes in Live & Reloaded. He wore a multi-sided triangular necklace, the yellow outlines from his robe were removed, and various patterns and shapes were added to the purple of his robe.

The Panther King had an obsessive and one-track mind. He mostly just thought about Milk and a missing leg for his milk table.