“Since this squirrel got rid of my Tediz, bastard, I zink ze latest addition to my plans is about to take shape. The incubation period is just about complete! Not a moment too soon! Yes, my liege, let us kill two birds vit one stone!”
—Von Kriplespac, Conker's Bad Fur Day

Professor Von Kriplespac, also known as the Weasel King, Professor, and Tediz Battle Master, is a villainous, Prussian weasel. He has an extensive role, as he is a mad scientist and leads the Tediz army, who are the main enemies of the Squirrel High Command. Kriplespac was also the Panther King's servant. Both characters are the main antagonist of Conker's Bad Fur Day and its Xbox remake, Conker: Live & Reloaded.

Kriplespac is based on a few characters. One of them is Adolf Hitler because he created a regime of the Tediz, of whom are based on the Nazis. This is especially obvious in the Beach Dead mission of the Old War. In it, Kriplespac was dressed like a Schutzstaffel. And does the infamous Nazi salute when he's idling around though due to the Tediz has a diffrent salutes (putting their hands together or the US salute) it may be due to the heavy stress that he's going through and probably did not meant to do the salute.

After being healed, Kriplespac adopted a mad scientist look: he put on a white lab coat, and a green glove for his right arm (or colored black in Bad Fur Day). His left arm became robotic, and his legless stumps were bandaged up crudely. Kriplespac's monocle was replaced with a larger, telescopic variant, but was connected to his other eye: his left one, which is red and robotic. In Bad Fur Day, his monocle connected from the back of his head.

Kriplespac became confined to a hoverchair for transportation, and would move around by using a joystick on each armrest. The hoverchair is able to hover because of a booster jet beneath it. It has a blue antenna, located on the top, that emits electrical zaps. It could have been used to recharge Kriplespac's hoverchair.

As a mad scientist, Kriplespac is based on the Doctor Who villain Davros. Both have no legs and rely on machines for transportation, both have a cybernetic eye, both have a mechanical hand, and both characters have created their own cybernetic killer race (Davros created the Daleks). Kriplespac is also based on Dr. Strangelove, a paraplegic scientist who was formerly a Nazi.

It is unknown how Kriplespac gained extra cyborg parts, as only his legs were shown to be blown off. However, it was mentioned that the Tediz fought in other battles after Fortress Deux before their retreat to Castle Von Tedistein. This suggests that Kriplespac sustained more damage from other battles.

Kriplespac's history is organized by timeline, given that the Old War and New War respectively take place before and after the events of Bad Fur Day.

In the Spooky chapter, Count Batula tells Conker about the centuries-old war, the Milk Wars. In the war, the panthers and the Kulas of Conk waged war against the weasels and their king. After betraying the squirrels, the Panther King chopped off the legs of the Weasel King and took over his kingdom.

It is believed that the Weasel King was Von Kriplespac. However, the Old War makes this event unlikely, so the story is considered mere fantasy. It could have been true but later retconned by that war.

“Forced finally to retreat to his clifftop castle stronghold, Von Kriplespac knew that only one thing could save them from defeat...the Machine. History has told us of its use, but then, no one knew for sure...”
—Castle Von Tedistein narrative, Conker: Live & Reloaded 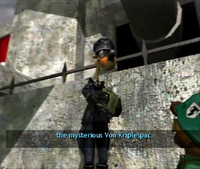 Kriplespac once wore the clothing of a military officer.

700 years ago, Von Kriplespac became a mighty ruler and dictator hellbent on destroying the squirrel species. To accomplish this, he created the Tediz, and started war against the SHC. 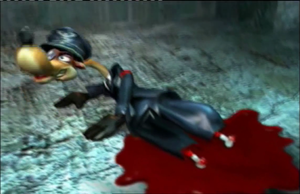 During the second assault of the war, Beach Dead, Kriplespac was in a fortress with his Giant Gun of Doom. His battle strategy was to use the gun on the SHC battle cruiser out at sea while the Tediz defended the base from squirrel soldiers. Kriplespac spends almost ten minutes (the length of the Beach Dead mission) charging up his cannon. With their weaponry and demolition equipment, the squirrels managed to get to Kriplespac. Rather than escaping, he frantically tried to buy himself time to fire the giant gun. He was shot by a missile from an SHC solider, and it blew his legs off. He was left crippled and bleeding on the floor but managed to survive.

Even though he is unable to return on the battlefield, Kriplespac retained his position as commander and monitored the battle at the next location, Fortress Deux. Kriplespac was contained in a safe area to heal from losing his limbs. Kriplespac decided to demonstrate the strength of his army by instructing them to pile and hang corpses of dead SHC soldiers around their campsite. In response, SHC soldiers drop their weapons in despair. Kriplespac was eventually repaired as a cyborg, and despite their fierce motivation, the Tediz were not winning the war.

After his soldiers had won many battles, Von Kriplespac retreated for a final stand at his primary base, Castle Von Tedistein. He hid another powerful weapon in the area, known as "The Machine". The plan was to introduce a new and powerful army of Machine Tediz. However, much to Kriplespac's anger, his troops forgot to pack the batteries for the device. They had to manually link the estate's power lines and then seal the connection.

During the battle, Kriplespac remained within his castle's upper tower. Just like Fortress Deux, Kriplespac observed the battle and gave orders to his troops. After every cable masts was activated, Kriplespac ordered the Tediz to overload the SHC's generator to dispose their troops and complete the connection. When this occurred, the SHC's generator exploded, and the first Machine Tedi soldier emerged from the Machine. Kriplespac and his army successfully held the SHC back, and Kriplespac worked on enhancing his Army with the Machine Tediz. This ended the Old War. 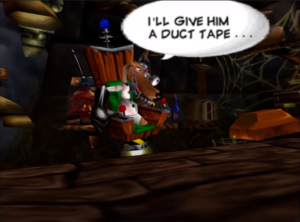 Kriplespac is angry at the Panther King.

“No legs, and now no life!”
—Von Kriplespac, when he gets sucked in space

Meanwhile in his lab, Kriplespac plotted on two things: the first was deploying his army of Tediz, therefore starting another war against the SHC, and his second plan was to overthrow the Panther King. In the It's War chapter, Conker was recruited by the SHC, and after a long battle he managed to defeat the Tediz along with another one of Kriplespac's creations: The Experiment and Little Girl. This angered Kriplespac, who grew to hate Conker as he did with the Panther King.

A new plan was made: the Panther King hired Don Weaso to catch Conker by putting him on a heist mission in the Feral Reserve Bank. Around this time, Von Kriplespac created an alien egg and put it in the Panther King's milk. The king was unaware of the hatchling that would soon kill him. Just as his plan was succeeding, the Panther King began to feel indigestion, and he called in the Professor to get him Milk. Much to Kriplespac's delight, the alien egg hatched, and Panther King's chest eventually burst open, killing him. Kriplespac named the alien Heinrich, and launched the vault, which is actually a shuttle, into space. He cited the castle as "so out of date". Kriplespac ordered him to kill Conker. However, Conker pulled a lever under the king's throne, and the ship's airlock opened. Kriplespac realized that he forgot to add high-powered boosters on his hoverchair in case the airlock opened. He was sucked toward the airlock, and his hoverchair was sucked into space. Kriplespac latched on the ground, but he lost grip and was also sent in space.

Another war began 200 years later, the Future War. It was revealed that Von Kriplespac survived, and he resumed his role of leading the army. Von Kriplespac waged war on the SHC and King Conker. The war was more dangerous, to the point where the squirrels sloped to defeat when the Machine Tediz rose from the same Machine from Castle Von Tedistein. A new objective was devised among both sides: finding the legendary "Thing", a supposed weapon that belonged to the Panther King.

The Tediz eventually discovered The Thing first, and the SHC later found out when it appeared on a cover of an issue of the magazine, "Fur Only". While searching for The Thing, Von Kriplespac made a wrong turn but ended up finding it as his map was upside down.

The Thing was actually a tomb with the Panther King buried inside, frozen in carbonate. Kriplespac commanded his army to steal the body, which they transferred to Doon, the Tediz' homeworld. Despite his hate for the Panther King, Kriplespac planned on reviving him to destroy the last of the SHC, and even called him "master". It is unknown what has happened to Kriplespac since the end of the Future War.