It has been requested that this article be rewritten.

“The antithesis of the Sneekers, Long Rangers are a class renowned for their long-distance effectiveness in the field of battle. Combined with Infravision, a means of scanning the whole battlefield for enemy positions, this makes them a serious menace at any distance---at least until you can get up really close and blow their heads off. ”
—From the game manual

“Long-Rangers take up positions where they can see the enemy and snipe them from a distance. With their infravision, they can effectively see through walls. Long Rangers are deadly at short range as well, courtesy of their aptly-named Widowmakers.”
—Community Conker site 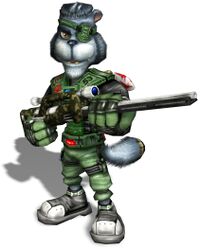 An SHC Long Ranger from the Future War

Long Rangers are a class in the Xbox Live & Co. mode of Conker: Live & Reloaded. They are characters who carry a Widowmaker sniper rifle that has two zoom modes and can fire either 7.62mm (anti-infantry) or high-velocity DU tipped (depleted uranium) (anti-armor) rounds. The bullets inflict limited damage with body hits, so only headshots are a guaranteed kill. The widowmaker also has a combination laser sight/overcharge which increases damage and accuracy, but the very visible laser beam reveals the player's position. Long Rangers carry magnova and flash-bang grenades, a medigun, and have the “infravision” ability. When upgraded, they receive the self-heal ability, an extra zoom for their widowmaker, a frag grenade, and a pair of "Krotch" 45 pistols (revolvers) for close-quarters combat. It is generally regarded as the most difficult Sniper in any shooting game to master. Prior to the Xbox Live's discontinuation, he could earn the "Rifleman Star" (earned by 1,000 kills), which makes his Widowmaker reload faster and have a steadier aim, and the "Eagle Eye Medal" (earned by 500 headshots), which makes so his widowmaker charge more powerful.

The SHC Long-ranger has, grey fur, and bronze eyes and like the SHC Grunt he has a stylized flattop hairstyle in the future wars. The most notable detail which actually has the most detailed story is having lost an eye probably due to getting shot off, a shortened tail mostly from either from an explosive or some Tedi might have cut it off, which has been bandaged, and it's unknown if he gains in during the future war a missing ear he also has shortened teeth. In the old wars, he wars a uniform like the rest of the SHC classes according to the US army ranks during the World War II era he might been a private. Due to losing an eye he uses a bloodied-up bandage patch to cover it, his backpack has a rabbit foot attached to it which suggests he may be lucky, and theirs an unknown human female on the backpack most likely from another rare ware title, and an m1 helmet. In the future war, He wears a uniform that has a sniper crosshair on it, also one of his arms is exposed road warrior styled and his backpack has a bloodied shovel suggesting he either used it to dig graves or to attack the new Machine Tedi threat. His pants near the shoes are rolled up and have a new eye patch that is cleaner.

The Tedi Long ranger in the old war, has a trenchcoat that has a harness and helmet that looks like a Stahlhelm and both of them have a jungled styled camo which may suggest he's good at stealth even more evidence that includes black paints on his cheeks. The Tedi long ranger in the old war is unique since he's the only one that has a fur tuff on his chin, He also wears a purple fingerless glove like the Tedi demolisher he also has grass on his mouth which suggests he's like to pretend smoke or is a smoker. also, he has leg wrappings. In the future war, He is almost naked having leg wrappings, a harness, and a fingerless glove on his right hand. The most noticeable features are his left being replaced with a robotic hand which has some interesting details like 10 tally marks which suggest that are his kills. a smiley face that is dead with a hole on his head. A crosshair on his top wrist and his top left head is gone revealing more robotic parts, with his eye being replaced with a robotic scope which might have enhanced his vision and the tube resembles a bear ear his other eye is completely yellow which suggests he's completely blind in one eye the most interesting detail about the Future long ranger Tedi is that he's the only one to have a purple nose which suggests its either a Genetic thing that the Tediz could have a purple nose or part of the machine Tediz

The SHC Long-ranger has a chill personality, Having a slow raspy voice. Most of the lines are curious like "Heh I can see his brains!", "Why I never that's what his insides look like!" and "Oooo look at his brains." He also seems to like to taunt the Tediz like "Daddy's waiting for you", "Come on punks... Come on.", "Oooo pretty, real pretty." and "We rearrange his face there". Some of the lines might suggest the Long-ranger is Texan since he mentions a lot of stuff that could be from the origin of there like "Like, a Turkey shoe on a duck farm.", "Like shooting shit rats back home." Some of the lines might suggest he is a cowboy-like "K- Cowboy better fire soon, they going to find you.", "Death of a cowboy....", "Hey cowboy move it!" and "They don't call me long carabine for nothin." and some of them suggest his home is a farm suggesting his past occupation is a farmer. he called the Widowmaker the "Long killing machine." He also gets very scared when gets blinded by a flash grenade "MY SIGHT GONE, IM OUT OF THE JOB!" and disturbingly he is suicidal due to the fact he has only one eye "I can't see, somebody shoot me in the head now!" He also seems he does not now the advance vehicles since, he alls the R-hog as a "Horse" or a "steed" suggesting he's either old enough to not only have cars or that due to living the farm he does not have such technology. He also calls the vehicle a "Pretty little thing."