Artwork of Conker aiming his Slingshot in Conker's Pocket Tales.

The Slingshot, also known as the Catapult in later games, is a recurring weapon in the Conker franchise. It appears in Conker's Pocket Tales, Conker's Bad Fur Day, and Conker: Live & Reloaded. It would have also appeared in the cancelled Twelve Tales: Conker 64. In every game, the Slingshot's purpose is to fire Conkers at something, usually enemies.

In Conker's Pocket Tales, Conker can obtain the Slingshot by completing a block puzzle in the Windmill of the first world, Willow Woods. This weapon allows Conker to fling Conker nuts, specifically at enemies. He can carry up to 99 Conkers to fling from the Slingshot.

Prior to acquiring the Slingshot, Conker's only attacks were Punching or Stomping, and the Conkers he collected had no use. The player can press 'B' to fire a Conker from the Slingshot, which fires in a straight line. This weapon replaces the punch attack until Conker runs out of ammo. 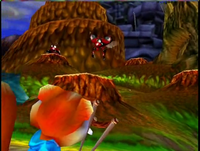 The Slingshot, now renamed the Catapult, reappears in Conker's Bad Fur Day and its Xbox remake, Conker: Live & Reloaded as a context-sensitive weapon. There are a couple of Context Zones that lets Conker use the Catapult: one in Windy, one in Bats Tower, one in Uga Buga, and one in It's War. He can also fire an unlimited supply of Conkers, unlike in Conker's Pocket Tales. To fire the Slingshot, the player must press

In Windy, Conker must fire the Catapult at four Dung Beetles blocking the pathway to the Poolands and Barn Boys. In Bats Tower, he uses it to unlock a trap door in the Catfishes' vault. In Uga Buga, it's used to lift up the top of the crusher by pushing the up arrow button, and to make it fall by pressing the down arrow button. This contraption is used to sacrifice the Baby Dinosaur. In It's War, the Conkers fired from the Catapult are engulfed in flames. Conker must fling them at two separate TNT Imps, whose TNT Barrel must explode on both sides of a crashed plane blocking the port exit.