The Sunflower is a tall, sexualized female sunflower in the Barn Boys chapter of Conker's Bad Fur Day and Conker: Live & Reloaded. King Bee cheated on his wife, Queen Bee, in favor of the Sunflower.

The Sunflower is a tall plant, with a yellow face and petals. She has a sexualized personality and a pair of large breasts, yet she is shy and often bends over to cover her face. The Sunflower wears red lipstick and purple eyeliner on her face. Her two leaf stems are possibly her arms. 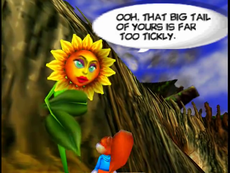 The Sunflower was first mentioned by Queen Bee at the start of the Windy chapter. She tells Conker that her husband left her for another woman.

In Barn Boys, the Sunflower is located midway up the right-side trail to . She is bent over, concealing her breasts with her leafy appendages. Conker is unable to communicate with her until after Franky hung himself in the Barn. This is when King Bee lies outside the location and asks Conker for help. He was originally uninterested, until King Bee mentioned a "big-breasted babe". King Bee says that she is lovely, and that he desires to "pollinate" her. He claims her stigmas are "like you wouldn't believe". He points out the Sunflower to Conker and begs for his help to go to her, with a reward of Cash from doing so. Conker goes to the Sunflower, who is still covering herself. He asks her for help and points out the King Bee, who wants to be with her. She ignores him and tells him to leave, deeming his tail "too tickly". Conker later meets a swarm of Tickly Bees, who enjoy tickling characters. He gets an idea to take them to the Sunflower. Conker must bring five Tickly Bee swarms to the Sunflower. This makes her open up from their intense tickling, and King Bee appears and "pollinates" her off-screen. The King Bee and Sunflower are heard having orgasms while Conker looks in disgust.