The Tediz are a race of robotic teddy bears, and are the main enemies of the Conker series, starting with Conker's Bad Fur Day. Tediz resemble normal teddy bears, but have stitches in various parts of their body. 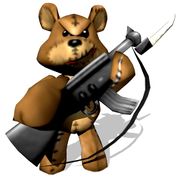 The exact origin of the Tediz is unknown, but an earlier race was first used in the Milk Wars 300 years ago. They had numerous defects, notably their composition out of highly-flammable material, and their eyes frequently fell out.

During the events of Bad Fur Day, the Tediz were re-commissioned by Professor Von Kriplespac though in the BFD manual they have already overrun the grey squirrel's homeland which suggests either Kriplespac had a backup plan to order the Tediz while he's not commanding or one of the Tediz could have taken the mantle of Kriplespac and has commenced the invasion. Their redesign gave them more durability. Conker would eventually join the Squirrel High Command in the It's War chapter and fight the Tediz. He was forced to infiltrate their base, which he eventually self-destructed; this killed hundreds in the process.

In the ECTS prototype of Bad Fur Day, the Tediz' inspiration from Nazis is more obvious. A deleted scene from It's War showed two Tedi Surgeons experiments on a living squirrel soldier; this behavior is directly mirrored by what concentration camp personnel did to their prisoners. Another deleted scene, from the Multi game Total War, showed a Tedi instructor resembling Adolf Hitler which he supposes to appear in Conker: Live & Cut as one of the possible models you can play as. Also in Conker: Live & Uncut, one of the Tediz you can play as, resembles Heinrich Himmler. A podium was included, and the cutscene ended with a salute. Additionally, the game mode's original name was "Blitzkrieg", named after the eponymous war strategy used by the Nazis.

Despite Kriplespac's death in the Heist chapter, the Tediz continued their war against the SHC. This war is chronicled in the Multiplayer mode of Conker: Live & Reloaded, where players can decide whether to side with the Tediz or the SHC.

The Tediz had a significant design change, most notably their less artificial appearance. Other differences include their big yellow eyes, their teeth. Despite being robots, the Tediz now bleed out blood upon defeat (they previously bled stuffing). The stitches on their skin are also less haphazard, although are still visible. They also wear green military outfits, including a helmet.

The Tediz are one of the main characters of the Multiplayer mode. They are one of the playable races of Chapter X. In Beach Dead, they are under the command of Kriplespac, to try and prevent the Squirrel High Command from entering their base. In Fortress Deux, they try to capture the flag of the Squirrel High Command. Lastly, in Castle Von Tedistein, they attempt to link the power lines to their time machine to introduce the Machine Tediz.

Despite their previous defeats, the Tediz return in Conker's Big Reunion as the main antagonists. They retain their Conker's Bad Fur Day appearance, similar to Conker, but retain their Nazi inspiration from Conker: Live & Reloaded.

The Tediz have assembled a number of buildings and businesses, including a secret lab, a logging camp, and a brewery. They are quite intent on ruining Conker's reunion, as they have assaulted Conker, stole his Cash, attempted to demolish The Cock and Plucker with a supply of explosives and, when that failed, kidnapped his friends, leaving for Conker a fake note declaring they all decided to leave.

There are numerous types of Tediz. Most of them only appear in the It's War chapter.

Some have debated over the singular form of Tediz being "Tedi". This is because the plural "Tediz" is used a lot more often; the "z" of Tediz makes an "s" sound. "Tediz" is an obvious misspelling of "teddies", and "Tedi" is of "teddy".

Tedi is the actual singular form, which can be proved from two cases. The first case is in earlier versions of Bad Fur Day, where Rodent says "Tedizs everywhere" in the chapter It's War; this means that "Tediz" was once singular and plural. This was grammatically fixed to "Tediz everywhere!" in the retail release, thus changing "Tedi" as the singular.

The second instance is in the multiplayer missions of Live & Reloaded, where characters use the singular form "Tedi", such as when a character says "Tedi Machine Charged Up" in Castle Von Tedistein.