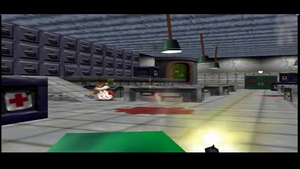 It's War is the eighth and penultimate chapter of Conker's Bad Fur Day and Conker: Live & Reloaded. The entire chapter is about the Squirrel High Command's war against the Tediz. Conker wears an army helmet during this chapter (and also wears army suit in Conker: Live & Reloaded). The entire chapter is based on the movie Saving Private Ryan. The bosses of It's War are both the Little Girl and The Experiment, who are fought together.

Numerous events occur in It's War chapter: Conker uses two Machine Guns to fight the Tedi army on Tediz Island. At the start of the chapter, he also detonates two TNT Imps to explode a large airplane blocking the SHC port's exit.

The Xbox Live & Co. multiplayer mode in Conker: Live & Reloaded was inspired by the It's War chapter. A little over half of the minigames in the original version's Multi mode are based on this chapter, including War, Beach, Tank, and Deathmatch.