The Little Girl, also known as Poppet,[1] is the sixth and penultimate boss of Conker's Bad Fur Day and Conker: Live & Reloaded. She is fought in the It's War chapter with a giant robotic Tedi, The Experiment. She is a small gray puppet who resembles either a chipmunk or squirrel. She has no legs for walking, so she relies on The Experiment to move around, by sitting as a puppet on its right arm.

She is one of two female characters voiced by Chris Seavor, the other being Queen Bee.[2]

The Little Girl was a living squirrel child, before the Tediz experimented on her.[3] It is unknown where she originated from. Her hands and the bottom half of her face are white. Her face strongly resembles Berri. The Little Girl has blonde hair twirled into a ponytail on each side, and a bow on her head. She wears a red shirt and blue overalls with a white-petaled flower and a few buttons. According to the Little Girl, she is the boss of The Experiment and provides it with commands. The Experiment is blind by itself, so it relies on the Little Girl to provide the vision.

Most of her attributes are directly inspired by Regan MacNeil from the 1973 horror film, The Exorcist. Both characters have has a blend of two personalities: an innocent, juvenile, and friendly one and a psychopathic, threatening, and evil one. Their voice becomes ghastly and raspy while their psychotic side is active.

The Little Girl has an expansive knowledge on machinery and weapons, including their terminology. Her two personalities sometimes overlap, for instance when she impulsively swears and insults Conker but tries to stop herself from doing such. The Little Girl changing to her psychotic personality can be identified from her eye color changing from blue to green.

The Little Girl is more powerful than she appears to be. This is evident from how she is unaffected by missile strikes and survives from being run over by large vehicles, specifically tanks.

In Conker: Live & Reloaded, a few attributes of the Little Girl were changed: her fur was recolored to a lighter gray, her bow was made larger and recolored from light blue to pink, and her nose color was changed from black to light pink. 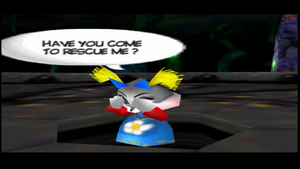 The Little Girl cries for help and wants to be unified with her parents.

Conker first encounters the Little Girl near the end of It's War chapter. She appears in the center of a platform in an underground sewer. Conker finds her crying, and she asks to be reunited with her parents. Conker tells her that the area is too dangerous for her.

When the Little Girl asks if he will rescue her, Conker hears the sound of a submarine and asks what it is. The Little Girl states that it is the "inverse phase sonar". Conker asks the Little Girl where she learned that, to which she claims from school. After asking what it does, the Little Girl tells Conker that she thinks it fires a Teddifunkin U47 ballistic missile. She points to a missile of such, which flies at Conker. He dodges it before it crashes into him. He assures to rescue the Little Girl, which makes her happy. Conker faces the player and believes to be in for a Cash reward from her parents.

After Conker blows up every missile-firing Submarine, he returns to the Little Girl, who gets excited and believes she will see her parents again. Just as Conker is about to free the Little Girl, Rodent drives the Class Twenty-Two Tank into the area and attempts to protect Conker from the Little Girl's deception. Her true nature is then revealed, as her eyes turn light green, and her head does a 180 degree spin.

In a reference to The Exorcist, the Little Girl asks Conker, "Do you know what your ******* daughter did?" Conker is shocked and says that he does not have a daughter. Conker runs off the platform, and it opens up. The Experiment is revealed, as rises out onto the main stage. In her psychotic state, the Little Girl claims to have not been a little girl for some time. She explains her role of having the brains and eyesight and The Experiment being the brawny, muscular body. The boss fight starts. 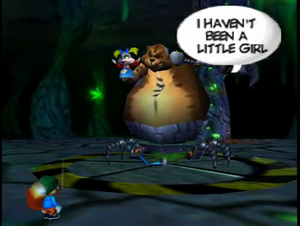 The Little Girl is revealed to be part of The Experiment.

After Conker hops into the Class Twenty-Two Tank, the Little Girl provides her first lesson about ballistics (similar to how a schoolteacher does). The Experiment pulls out giant mini-guns, and she describes its capability of firing 8,000 rounds per second. She boasts of its brass cased 8mm, tungsten alloy heads, and high explosive charge. She and The Experiment utilize this weapon to attack Conker.

After firing a missile into The Experiment's back, the Little Girl presents a new weapon: a high energy inverted magneto laser with a six-pronged attack. Like the previous round, Conker must blast off both weapons, then the Little Girl. Like last time, the Little Girl swears again and tries to calm herself down.

After Conker blasts The Experiment in the back again, the Little Girl presents more powerful weapons that shoot "fur-guided" missiles, otherwise known as homing missiles, and multiple warheads. She believes that Conker has no of surviving the missiles that it can fire. In the third and final time, Conker must blast the weapons off The Experiment, then the Little Girl. After she insults Conker again, he must blast The Experiment in the back again. 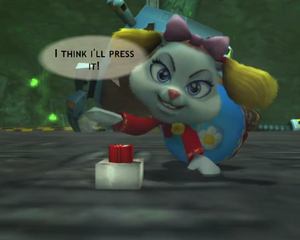 The Little Girl is about to press the self-destruct button.

Shortly after being blasted out of the Class Twenty-Two Tank, the Little Girl calls Conker and regains his attention. In a last resort, the Little Girl shows a red button to him. She presses it, which activates a self-destruct countdown on Tediz Island. She makes an evil laugh, and Conker runs out from the area. It is unknown if she survived the island's eventual explosion.