This article is about the final chapter of Bad Fur Day. For the mini-game in Bad Fur Day's Multi mode, see Heist (Multi). 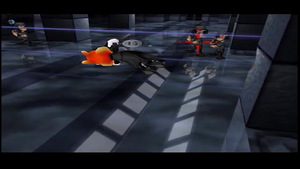 Heist is the ninth and final chapter of Conker's Bad Fur Day and Conker: Live & Reloaded. In the chapter, Don Weaso puts Conker and Berri on a mission to rob the Feral Reserve Bank. When Conker and Berri enter the vault with numerous Cash bundles, it is revealed to be a trap set up by the Panther King. The boss of the chapter is the giant xenomorph, Heinrich.

The battle against the Security Guards directly parodies the iconic lobby fight scene in the sci-fi film, The Matrix. Some other moves originating from the movie, like when Conker dodges the bullets, are also shown.