Dung Beetles are an insect species who appear in Conker's Bad Fur Day and Conker: Live & Reloaded. Most of them are enemies toward Conker. They are large characters, and are about two times bigger than him.

As their name suggests, Dung Beetles are dung beetles, and they live in the Poo Mountain area of the Windy overworld. Just like dung beetles from the real world, they like feces. One of them even operates the Poo Cabin.

The Dung Beetles have a Liverpudlian accent. This most likely references the rock band, The Beatles. This is corroborated from a cutscene with four Dung Beetles in the Sloprano chapter, and that Beatles is a homophone of "beetles". 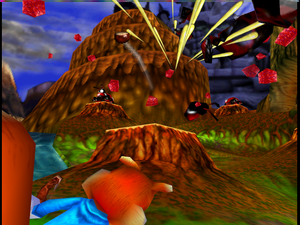 The first Dung Beetles that Conker encounters is early in the Windy chapter. There are four of them, and each one rests on their own tree stump on a downward slope adjacent to Poo Mountain. Conker must defeat them to access the path to the Barn Boys chapter.

After Conker reads a Manual and learns the Slingshot controls, he fires Conker nuts at the Dung Beetles. When a Dung Beetle gets its first hit, it angrily flies toward Conker. He must fire at it second time so that it explodes and dies. Conker is required to kill all four Dung Beetles.

The Poo Cabin opens at 10 o'clock (after Conker opens the Barn door in the Barn Boys chapter). Inside, Conker meets the establishment's operator, a Dung Beetle who uses profanity. His business is entirely based on Pooballs, which he has a shortage of. He demands Conker to get Daisy and the cows to defecate. In return he allows for Conker to use the Pooballs, which Conker can roll outside the Poo Cabin. After he floods and exits the Poo Cabin, he finds the Cabin's manager outside. The Dung Beetle restates that Conker is permitted to use the Pooball, and then he flies away.

The last Dung Beetle is seen the very start of the Sloprano chapter. When Conker enters inside the Poo Mountain, a Dung Beetle flies into him. Conker gets annoyed and tells him to watch where he is going. The Dung Beetle urges Conker to leave and tells him of something "really bad" inside the mountain. Conker asks him what the matter is, and the Dung Beetle tells him about an incident from two days ago and provides a flashback.