Private Rodent, otherwise known as Rodent, is a gray squirrel and a member of the Squirrel High Command. He is one of Conker's allies, and he appears in It's War and Heist chapters of Conker's Bad Fur Day and Conker: Live & Reloaded. He also helps Conker fight the Tediz on Tediz Island and the chapter boss, Little Girl and The Experiment.

Rodent is a short squirrel who wears a green military outfit and goggles. His outfit is an expensive prototype of an indestructible uniform, the Experiment G7224. Him and Conker seem to have met before the It's War chapter, because upon meeting Rodent, Conker asked him how he is doing. Rodent is a nerd who, like the Little Girl, knows a lot about military-related subjects.

Rodent has an optimistic and enthusiastic nature, which he displays upon discovering the Class Twenty-Two Tank. He is friendly and somewhat innocent, which is shown after he crashes into the Windmill. He also thanks Conker, in a somewhat juvenile manner, for helping to fight the Tediz. 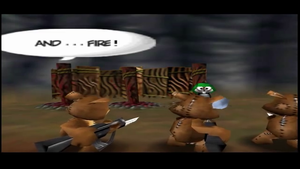 Shortly after fighting a Tediz on a Gun Turret, Conker enters a room where he finds Rodent tied against a wooden post. He witnesses the Tediz attempt to shoot him to death, but Rodent, who ducks in his indestructible outfit, manages to survive the attack. In Live & Reloaded, two other SHC soldiers are tied up on separate posts and were both shot to death.

Conker fires his Machine Guns at the Tediz and rescues Rodent. He is urged by Conker to leave the area. Conker then recognizes Rodent and asks how he is doing. He notices Rodent's unique military suit and asks him about it. Rodent explains that he is wearing the Experiment G7224 outfit, which makes him invulnerable to being injured in military operations. He decides to help Conker navigate through the Tediz base and act as a shield. Rodent even made a term to describe his role, "operation squirrel shield".

Conker and Rodent must navigate through a long pathway and avoid blowing up from bombs dropped out of bomber planes. Additionally, whenever a Robo-Spider runs at them, Conker must go behind Rodent to be shielded from the explosion. During gameplay, Rodent even tells Conker to do it. 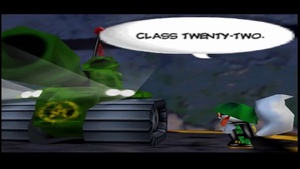 At the end of the path, Conker and Rodent find a large gate with a lock on it. Rodent decides to stand at the gate while Conker shoots off the straps securing its lock in place. After they open the gate, Rodent finds a Class Twenty-Two Tank, a military vehicle that he has a fascination over, and climbs in it.

The two must cross a narrow pathway and destroy a nearby tower. As a result, Conker must jump out of the tank while he enters a hole leading to an underground base with the Little Girl. Just as he tries to rescue her, Rodent crashes through the ceiling and tries to stop Conker from rescuing her. The Little Girl reveals herself to be the puppet and brains of The Experiment. During the battle, Conker takes over the Class Twenty-Two Tank and tells Rodent make space for him.

The Experiment is eventually destroyed from a third hit. In revenge the Little Girl sends Robo-Spiders to destroy the Tank. Conker and Rodent blast out of it, and Conker then discovers him lying on the arena unconsciously. Conker believes that Rodent died, so he gives a commemorative speech about him.

Rodent wakes up during the last seconds of the self-destruction countdown. He reveals that he was temporarily knocked out, and then remembers the countdown timer. He looks at the countdown timer and realizes it to be a few seconds from reaching zero. Rodent blasts out of Tediz Island, whose destruction is observed by Conker, The Sarge, and the SHC survivors on a boat. Rodent flies over the SHC survivors, and Conker realizes that he survived. He happily tells it to the others, who briefly congratulate him. 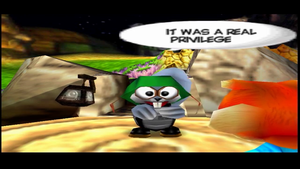 Rodent feels privileged to have worked with Conker.

When Conker enters back in the Windy chapter, he finds out that the Windmill was destroyed. He finds Rodent in the debris, who last remembers crashing into a windmill-like object. His suit protected him from dying in the impact. Rodent then asks Conker what has been happening. Conker is unsure and tells Rodent that he may leave and give his regards to the other SHC members. Before leaving, Rodent compliments Conker for assisting him in the operation. He says goodbye to Conker, who then calls him an "idiot" behind his back.

Rodent is one of the characters who witnesses Conker's inauguration in the Panther King's Castle, after Heinrich is defeated. He also chants, "Long live the king!" with the other characters. He is also shown at Conker's throne in the opening cutscene, where Conker introduces his "bad fur day".