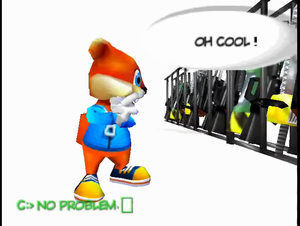 The Programmer communicates to Conker in Conker's Bad Fur Day.

The Programmer is an unseen character of whom Conker communicates with in the Heist chapter of Conker's Bad Fur Day and its remake Conker: Live & Reloaded. As the same suggests, he is the game programmer, who is represented by a command prompt at the bottom-left corner. He could possibly be represented by a programmer of the real world company, Rare.

After Conker's unsuccessful third attempt at throwing Heinrich out of the airlock, he pounces at Conker's spacesuit. The game freezes, and Conker asks the Programmer to help him defeat Heinrich. The Programmer agrees, and in a The Matrix-type scene, Conker picks a Katana from a long array of weapons. Conker requests him to teleport him and Heinrich into the throne room of the Panther King's Castle.

The Programmer unpauses the game, and Conker mutilates Heinrich's head. The Programmer leaves, however in the commotion, Conker realizes he forgot to ask him to revive Berri.