Heinrich is the final boss and the tertiary antagonist of Conker's Bad Fur Day and Conker: Live & Reloaded . He is a Xenomorph and is directly inspired from the Xenomorph from the classic sci-fi film, Alien. The boss fight against Heinrich is based on Ripley's fight against the Alien Queen in Aliens. His master (and possible creator) is Professor Von Kriplespac.

Heinrich resembles an average Xenomorph: he has a long forehead that stretches back, a pair of jaws, and a long, curved tail. Heinrich has three claws on each foot, dark red lips, and no eyes. He is black in Bad Fur Day but was recolored to light blue in the remake, Live & Reloaded. His lips were also changed to light purple in the remake. Heinrich's voice was recycled from Fulgore's voice in the first two Killer Instinct titles.

Given his master's correnspodence to Adolf Hitler, its name is likely based on Heinrich Himmler. 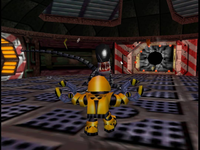 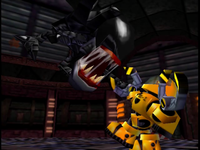 In the Heist chapter, after Berri is shot by Don Weaso, the Panther King starts to feel indigestion. Von Kriplespac somehow got the Panther King to unknowingly swallow an alien egg. Kriplespac anxiously awaits for it to hatch. Shortly after the Panther King has problems with breathing, a Xenomorph bursts out of his chest, which instantly kills him. Kriplespac names the Xenomorph "Heinrich" and orders him to kill Conker. Don Weaso flees in fear of Heinrich. Kriplespac then somehow sends the entire room into space.

Conker has to pull a nearby lever. As he goes to it, Conker must avoid Heinrich, otherwise he gets instantly killed by him (regardless whether his Life Bar is full or not). Conker pulls it, which opens the air vault opens. It triggers a strong vacuum that sucks objects and characters into deep space. Conker manages to survive the force, and he gets into a Spacesuit to battle Heinrich and protect himself from the vacuum of space. Heinrich approaches Berri's body, and Conker says to Heinrich, "Get away from her, you bitch!" (a quote originally said by Ellen Ripley). 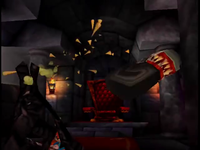 In the battle, Heinrich's two attacks include biting and spinning around to whip Conker with his tail. To attack Heinrich back, Conker has to wait for his biting attack and block it by immediately punching his face three times. Heinrich spits out some green ooze (which is his blood) while being punched, and falls on the floor unconscious. Conker has to grab Heinrich by his tail, spin him around fast, and throw him into the air vacuum with accurate timing. (This attack is directly taken from the boss battles against Bowser in Super Mario 64, where Mario has to grab Bowser by the tail, swing him, and throw him into a spike bomb.) Heinrich manages to grip the corners of the exit's wall and jump back in.

After Conker swings Heinrich out a third time, Heinrich falls into the vacuum of space. Somehow he jumps back in, to Conker's surprise as he thought Heinrich was defeated. Heinrich walks toward Conker and suddenly pounces at him. The game suddenly freezes (except for Conker), and Heinrich is stuck in midair.

Conker requests a Programmer for help to defeat Heinrich. He requests a scenery change, and a select from a variety of weapons (in a The Matrix-inspired scene). Conker decides on a Katana, and him and Heinrich go into the throne room of the Panther King's Castle. The games resumes after Conker tells the Programmer to continue it. Heinrich looks around, bewildered over the change in scenery, and Conker immediately decapitates his head with the Katana. Heinrich's head goes flying. His body collapses on the carpet, with acidic blood leaking out. Conker notes it as "a bit volatile". Heinrich has not been seen since.