The Haybot is a robot initially disguised as a Haystack. It appears in Conker's Bad Fur Day and its Xbox remake, Conker: Live & Reloaded. It is the boss of the Barn Boys chapter, and parodies the The Terminator. It is fought twice--once in the barn with its haystack disguise, and a second and last time in an underground sewer, where its true robot form is revealed.

The Haybot's hay disguise resembles a regular Haystack. Its face looks different from a normal one, and it has arms with three fingers on each hand.

When its disguise burns off, it is revealed that that it moves around by bouncing on its single jumper leg. It has a red Terminator-like eye (revealed near the end of the first battle), and its left eye is green. The Haybot carries two Suzie 9mm missiles on its back, which it fires when it desires. It has yellow-and-black stripes all over it, likely a reference to typical caution signs. 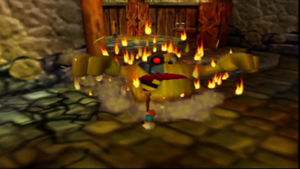 The first battle against Haybot in Bad Fur Day.

After Franky hangs himself and Conker exits the barn, the Haybot jumps from off the top floor and onto the ground. He claims to Ron and Reg that his "arch-nemesis", who is Franky, was defeated. Ron and Reg shiver as he talks to them, meaning they are scared of him. The Haybot then decides to wander around aimlessly.

After Conker saves Franky by throwing Knives at his rope, they team up and fight the Haybot on the ground floor. During the battle, Conker must ride on Franky and charge him into the Haybot from behind. The Haybot's only attack is slamming its hands on the floor. If the Haybot slams the duo, Conker falls off Franky and loses a Chocolate piece from his Life Bar. Franky follows Conker and tells him to hop onto him.

When Franky charges into the Haybot a second time, it lights on fire. Part of its face is burned off, revealing a red terminator eyes. The Haybot analyzes Conker, selects the line "Buff you, asshole!" and says it to Conker (the scene references the "Fuck you, asshole!" line during a part of The Terminator film).

The Haybot hops around faster, and the duo must charge into the Haybot a third and final time. The Haybot them stomps on the floor, and it cracks. All three of them collapse into an underground sewer. On the ground, the flames burn off the rest of the Haybot's hay and reveals its entire robot form.

The Haybot's robotic form reveals a jumper leg and the ability to fire two Suzie 9mm missiles at a time; one of the missiles calls the Haybot "sweetie-pie" and is prepared for fire-on-command.

In the second battle, Franky, with Conker still on his back, must hop to a water pipe. The Haybot fires two Suzie 9mm's at them, and they must jump over both missiles, who inadvertently bust the water pipe, with sewage spilling out. Conker and Franky must lead the Haybot to the sewage, which short-circuits it. It hops to the center and spins around slowly. The Haybot has a big red button on its back that reads "Do not press". Franky must jump for Conker to reach and press it. This blows off the Haybot's left arm. The cycle repeats two more times; when Conker hits the button a second time, the Haybot's right arm blows off. The entire Haybot explodes when Conker pushes the button a third time. A cutscene shows its red eye flying into the air and its jumper leg hopping toward Conker but then dies out from electrical failure.