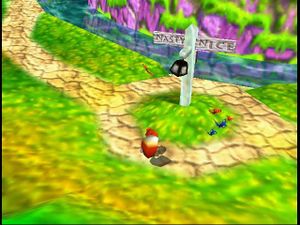 Windy is the second chapter of Conker's Bad Fur Day and Conker: Live & Reloaded. It is somewhat of a hub world, as Conker can directly access the earlier chapters from it (except the later ones, starting with Uga Buga). Windy is the only chapter without a boss. Windy follows directly after the short chapter Hungover, and is followed by Bats Tower.

Windy is a large grassland, filled with water, trees, wasp hives, and even a terrain of poo, with the Poo Mountain. It is obviously loosely based on the Windmill chapter of Twelve Tales: Conker 64. Windy's main landmark is the Windmill, despite having no role and that it cannot be entered.

The song heard in Windy is the theme song of Conker's Bad Fur Day. It changes based on where Conker heads in the area (except Poo Mountain); for instance, if Conker goes to the wasps' hive, a buzzing variant of the song plays. Barn Boys' theme is a farm variant of Windy's. In Live & Reloaded, Conker whistles the theme during a part of the chapter It's War. It is also heard on a radio at the start of Banjo-Kazooie: Nuts & Bolts, when Banjo and Kazooie play Xbox 360 and eat pizza.

In Conker's first non-tutorial mission, he has to retrieve Mrs. Bee's hive from the wasp gang Wayne and the Wankas, running down the pathway until he reaches Mrs. Bee, who shoots the gang with in-built machine gun in her hive and gives him his first Cash bundle.

With at least $200, Conker enters the Poo Cabin and meets the Dung Beetle in charge of it, telling Conker what he needs to do, he opens a trap door and jumps into a hole, climbing up a series of ropes he enters a door that leads to a farm-like area.

Conker comes upon the farm area and has climb and jump his way up roof tops to open the prune juice valve, after opening the valve, a target arrow appears, and Conker rides Bugger Lugs into it, and releases the cow.

Conker has to ride the Bull and knock the cow so she goes over to drink the prune juice, after exhibiting an unholy case of diarrhea, Conker must ride The Bull into the cow, blasting her to bits and repeat the process.

Conker must dive into the Cabin's sewage system (now filled with poo that Conker can swim in) and navigate his way back to the Cabin lobby, where a ball of poo has been created for him to use.

Conker has to roll balls of poo up the mountain (killing an enormous sleeping Dung Beetle in the process) and up to the summit where an upper entrance (which Conker is unable to enter) is used to break the gate blocking the lower entrance that can be entered, giving Conker access to Sloprano, Conker can also gain access to Bats Tower using a poo ball.

After Conker completes the Uga Buga chapter, he finds that Mrs. Bee's hive was stolen by Wayne and the Wankas again. Conker, eager for his quadruple reward, must now go inside the Wasp Hive for a deep insurgency mission, after shooting enough wasps, Wayne and his gang once again chase after Conker, once again going down the pathway until he comes to Mrs. Bee, who uses more explosive missiles on them than last time.

After Conker has accumulated enough money (all the money from the previous chapters) he can ride Mr. Barrel down the spiraling pathway, when he reaches the base of the path he is knocked off Mr. Barrel and falls unconscious, Mr. Barrel rides into the blocked off river entrance, giving Conker access to the Spooky chapter, night also falls upon Windy after Conker wakes up.