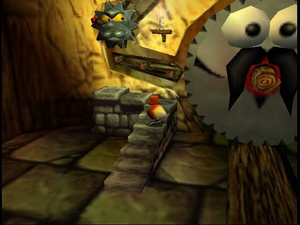 Bats Tower is the third chapter of Conker's Bad Fur Day and its remake Conker: Live & Reloaded. It mostly takes place indoors, but its outdoors is similar to that of Windy's, as it takes place in the grasslands. Bats Tower also has a river guarded by the Dogfish.

The chapter's main landmark is an enormous, old tower of the same name. It is filled with Bats, gears and cobwebs. The last part of the Bats Tower chapter is set in an underwater chamber, Clang's Lair, accessible from the Catfishes' vault.

The setting of this chapter takes place in a green field with a river that is inhabited by Catfish. Down that current leads to the area of Bats Tower with the Dogfish watching over its entrance. Living Cogs live inside the tower and it is secured by Clang Goblings that walk around the tower, and also swim in the underwater section reaching a pair of Lady Cogs above the water. As the name suggests, it is also guarded by Bats who are friends of Barry. Inside the safe, leads to Clang's Lair, an underwater fortress with Clangs swimming around the room. At the end of the room leads to a Boiler Room that is inhabited by Fire Imps and where The Big Big Guy was located.