From the Conker Wiki, the Conker encyclopedia
(Redirected from Conker: Live & Uncut)
Jump to navigationJump to search 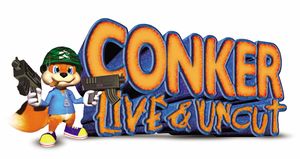 Conker: Live & Uncut was the original iteration of Conker: Live & Reloaded, and it was unveiled at E3 2003. It was designed with enhanced graphics and sound for. It was going to have an uncensored script, and additional footage that was cut from the original game, Conker's Bad Fur Day.

Team-focused, story-driven, live gameplay: With multiple scenario-based gameplay modes, each with its own story, gamers would experience much more than a "shoot everything" premise. In the team-based scenarios, players would be thrust into themed environments that reflect the specific goals they are challenged to meet. The scenarios are designed to be played by two or more teams at once, with up to 16 players. Gamers can play various scenarios, including The Heist, which pits four teams of four against each other in a deadly race to rob a bank. Or, experience the never-ending onslaught of ravenous aliens attacking a lonely space outpost in "Alien Base." Each scenario was highly customizable, allowing for dozens of variations in gameplay.

A raunchy, twisted, and irreverent world: The humor, characters, and gameplay are over the top in every way, with rude wit, lewd innuendoes, ridiculously graphic violence, and of course, foul language. The juxtaposition of the characters, cartoon animals, and their world is at the heart of the humor. The taunts, exclamations, and character reactions bring out the true Conker flavor.